of which the traveler 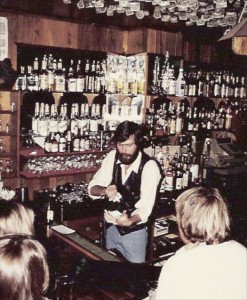 To help you better understand how this all came about we should set the stage a bit. None of this happened by design..certainly not by MY design.

Several different threads that started in very different parts of the US will eventually interweave and intersect at the Tower Magic Bar in Snowmass Village, Colorado.

The overarching story would be how a little bar in the center of the brand new resort of Snowmass Village would become the crucible for a lot of disparate people and things to come together. A scant 8 miles away from its glitzy cousin Aspen, a center of wealth and culture, Snowmass is up a side canyon and provides one of the best ski hills in North America.

In 1967, when they first built the lifts in Snowmass, I was a 20 year old goof ball who was trying to make a go of it as the dry cleaning magnate of Naugatuck, a small mill town in central Connecticut. I had no idea where Snowmass was. I had never skied. It was not on my radar screen at all. But, as friends would come home from various colleges and regale me with stories of the happenings on campus, I was aware that the big world out there was moving along and I began to think I was really missing something.

About that time, through a strange set of circumstances, certainly not by my design, my father passed away from colon cancer when he was 56. Not long after him, my mother who was stricken with Multiple Sclerosis  for the last 20 years of her life gave up and followed my dad six months later. Reasons for staying began to dry up.

Little did I know when I was eating Italian food at a place called Mom’s in Connecticut, somewhere in Chicago there were joints just like that, a German joint, an Irish joint, an Italian joint each with their loyal neighborhood following. They were cornerstone kind of places where birthdays and anniversaries were traditionally celebrated for years. The owners did magic and had for years. They were very skillful but they were really blue collar, roll up the sleeves and wash the glasses kind of folks. They were the ones working steady all the time, stacking up the years. When I finally drove to the west coast to seek my fame and fortune, I drove right through Chicago and had no clue what a role these little centers of magic and fun would play in my life.