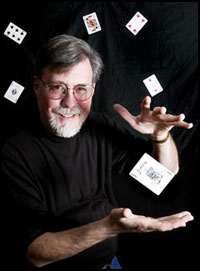 And an explanation at the end as to the status of the Tower since John Denver’s untimely demise.

It’s a cold winter night in Snowmass Village, Colorado. An exhilarating day of skiing has left you with a ravenous appetite and a desire to continue your magical vacation experience. Suddenly, there’s a roar of laughter coming from the window under the giant tower at the end of the mall. The cheers and laughter grow louder as you draw close. You pull open the door, step inside and you’re instantly a participant in an unforgettable evening of magic and comedy. Like thousands before you in the last two decades, you’ve just stumbled into the Tower Magic Bar…

Did I say two decades? Twenty years? That’s right, it’s been 20 years since Bob Sheets transformed a rather ordinary bar located in John Denver’s new restaurant into a magic show room. Sure it still looked like a bar back then, having none of the lighting, sound and special effects that it has today, but… Wait a second; I’m getting ahead of myself.

You see, it’s tricky for me to talk about the early days of the Tower – mainly because I wasn’t there. But I’ve been told a million stories about the various characters that passed through the doors. Too many to try to tell them all here, so we’ll stick to the main magicians and events. Oh, we’ll slip in a colorful tale or two, but this is for the record. I’ll tell it to you the way it was told to me. If we can turn back the clock to 1975, the story goes something like this …

Here’s to the Tower – And Twenty Magical Years

And now the party is over.